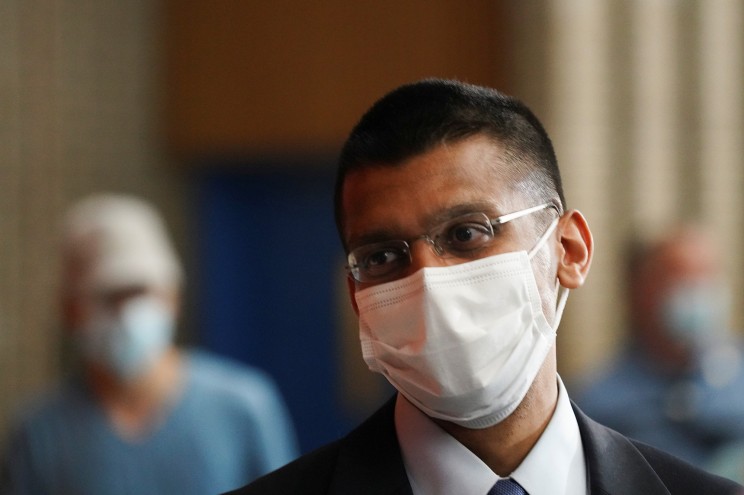 About 1,000 New York City Health Department employees have signed a letter blasting the agency’s return-to-office guidelines, accusing it of failing to communicate internal COVID-19 cases and not following a “science-informed” approach, including masking and social distancing.

“It’s a huge contradiction because we’re the Health Department,” one agency worker told The Post.

“We, of all agencies, are falling short of implementing an evidence-based and science-informed return-to-office process.”

“We’re not just whiny people who want to sit at home in sweatpants on our laptops,” a second DOH employee said.

“We are all so committed and dedicated to public health, and so hardworking. But we want scientific evidence explaining why it’s safe to go back to the office.”

“We’ve continuously found hand sanitizing stations empty on the 11th floor and a lack of hand soap available at 11th-floor kitchen sinks, despite having placed several service requests,” the fed-up public health workers wrote in the letter, which was obtained by The Post.

In addition, not all employees are adhering to mask rules — and instead of having supervisors enforce them, workers are asked to “police each other,” which creates uncomfortable situations, according to the letter.

The letter requests agency officials “regularly provide information about our actual risks at the worksite, based on available evidence,” including the number of staff infected with COVID-19 and the “date of diagnosis at different DOHMH worksites.”

“Be transparent with actual details on airflow, expected transmission rate in our workplace settings, the rationale for removing the physical distancing requirement, and why it is considered safe to have us eat at our desks,” it says.

The exasperated agency workers also want to know why the commissioner didn’t question the mayor’s decision to force all 300,000 city workers back to their desks full-time starting Sept. 13 if it isn’t safe.

They note that Chokshi told them during an internal town hall meeting in August that productivity hadn’t suffered from remote work during the pandemic — despite the mayor saying that municipal workers don’t get as much done at home.

The Health Department has led the city’s response to the pandemic that’s sickened over 1 million New Yorkers and killed nearly 35,000 residents.

The employees argue they’ve actually been less productive since returning to the office last month because they’re still doing virtual meetings due to conference room capacities — and agency computers lack microphones and cameras, and internet connectivity is spotty.

Chokshi responded to some concerns in the letter, but said the policies were set by the administration and the Department of Citywide Administrative Services. Agency reps did not immediately comment.

“Staff feel disrespected and diminished, and deserve the dignity of transparency and direct answers and are not getting them from agency leaders,” one of the DOH workers told The Post.

Meanwhile, employees from other city agencies have expressed similar concerns about the de Blasio administration’s rush to return to the office.

Democratic mayoral candidate and outgoing Brooklyn Borough President Eric Adams has said he prefers a hybrid model with some municipal workers telecommuting and others coming into the office.

What You Need to Start a Wood Pellet Business

How Much Bleach Should You Use When Pressure Washing?

Something about NAKTO Electric Mountain Bike

The Top 5 Reasons to Own a Doom Tactical Vest

Why Would You Prefer an E-Bike over other Bikes?